As film photography grows in popularity, businesses are sprouting up to meet demand

A collection of 35mm black and white films by Kodak, Ilford and Kenmore. Photo courtesy of Buy Film Canada.

In 2015, I produced a short film about film photography. It might have gone unnoticed, but our friends over at PetaPixel shared the video and before long it had been viewed thousands of times.

I wanted to know if film photography was a dying art in my hometown of Calgary, Canada. What I found out surprised me. Film wasn’t dying. In fact, it was experiencing a somewhat tempered resurgence. But one thing I heard over and over again was that film was kinda hard to find. Plus, many of the emulsions had been discontinued.

Then a few weeks ago, while surfing the interwebs, I came across a new business, Buy Film Canada, selling fresh rolls of film to Canadians. So Notice reached out to owner Andrew Smales for a quick interview on the state of the film nation.

What is Buy Film Canada?
Buy Film Canada is a website specifically aimed at helping Canadians get film at reasonable prices. I’m a film photographer myself, and I got tired of having to jump through hoops, and pay customs and duty and taxes, etc etc anytime I tried to get film at a reasonable price, and finally I said “shoot, there must be other people in this same boat”, so I started the store.

Why start a business like this now?
Timing-wise, I think this just lined up with me having a little bit of free time to actually get this going. I love the idea of running an online store where I mail stuff out, and I’ve always meant to get one going (there are a couple of other ideas I almost did in the past, but didn’t work out for whatever reason), but it’s quite a process. You have to get the store set up on a technical level, make sure it has the right features, allows for a smooth customer experience, etc, but also just finding sources for the merchandise is a huge amount of work, and something that doesn’t get much easier as time goes on. I’m importing a lot of stuff from Japan, and it’s not a particularly quick or easy process.

Why would someone who has never shot film want to give it a try?
Film photography is, in my opinion, a whole different artistic format than digital. When it comes to digital, everyone focuses on the end result more than anything. How sharp is the picture, how many megapixels is it, etc. Film is a whole other beast, and a huge part of it is the actual process, and experience of doing. Reading about it in the abstract doesn’t give you any true idea of what it’s like to actually get a camera, get some film, think out your shots, get the film developed (maybe by yourself, maybe by a lab), etc etc. For someone who has never shot film, I’d say just give it a go, it’s insanely cheap to get started, and go through the process once, and you will have a much better idea of why film appeals to so many people.

What is your personal history with film?
My parents had cameras when I was a kid, and I was always very interested in them, and I remember really wanting a Kodak Disc Camera for one summer (thankfully I never got it, those are a horrible format it turns out). As a kid, I had a little teeny 110 camera, and I’d occasionally use the fairly cheapo cameras my family had, but I wasn’t super into it. Once I got to college, we had a compulsory photography class, and we had to buy an SLR. A good friend of mine was angry about this, but I was excited, because I had an excuse to buy a good camera. I got a Nikon FG, which I still have, and I loved that thing. I stuck with it, although I did have a period where I was using digital more than film. In the past few years, I’ve gotten back to being just about 100% film for still photos, although I still like digital because I love filming video.

Many film emulsions have been discontinued over the years. Have there been any new film product releases?
Amazingly, three new films have come out and hit the market since 2016, and there are more that have been announced. Film Ferrania P30 just came out (mostly to Kickstarter backers), and Bergger Pancro came out this year, and is extremely popular. The one I find the absolutely most incredible is JCH Street Pan 400, released by Bellamy Hunt, aka Japan Camera Hunter. This is a guy who is basically a blogger and a camera dealer, and he single handedly put a new film into production (it’s based on an older formula, but the film is all new, and being made currently). He didn’t have a startup behind him, or a crowdfunding campaign (not that there’s anything wrong with those things), he just went ahead and put the work in to get the film made. It’s amazing it happened, and I actually just wrote something for the little insert I send with all my orders, basically saying the same thing I’m saying here. In my opinion, anyone who values film photography in any way needs to shoot at least some JCH Street Pan. 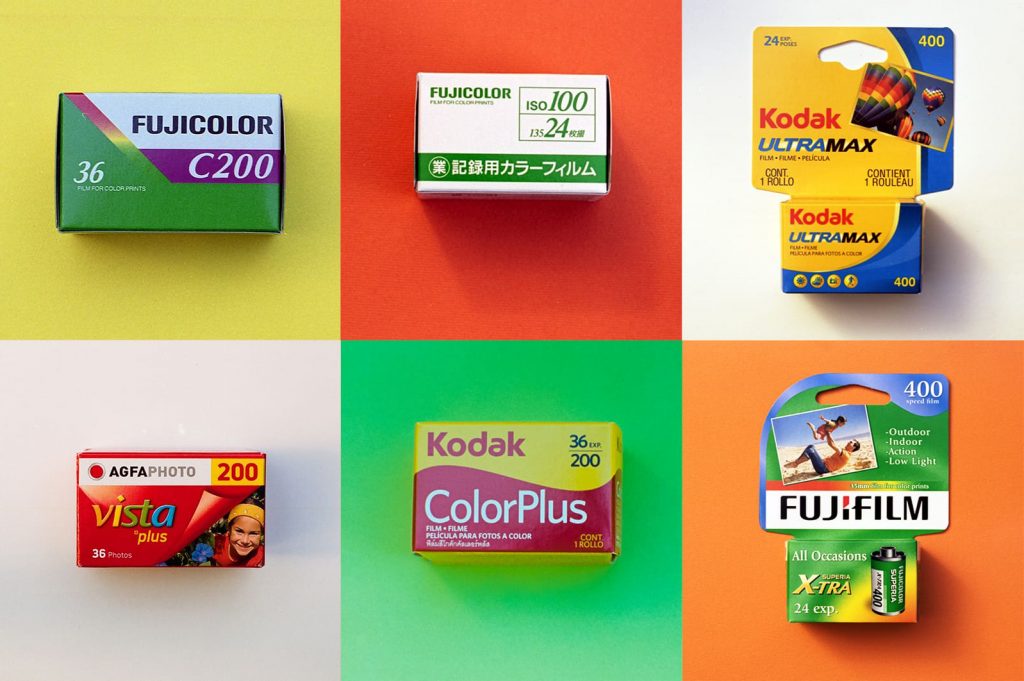 What is your favourite film?
I’m not sure I have a favourite, but I’d say if I had to pick a range of films that span a few ISOs, for different lighting conditions, I’d go with Ektar 100 for times I’m going to be 100% outside, Portra 400 for more general conditions where maybe I’ll be inside sometimes as well, and (sadly just discontinued) Fuji Natura 1600 for night-time shooting. All 3 are incredible films. But honestly, almost every film being made these days is pretty high quality, there really are no dogs, so I get excited almost no matter what I’m shooting. Sometimes I’m putting together orders where someone orders a bunch of Ilford film and I’m just thinking “Oooh this lucky person gets to shoot all these!” – I get excited way too easily about all the films out there haha!

A lot of people think film is only for hipsters? Is that true?
The whole idea of a “hipster” has become such a meaningless phrase. Maybe 10 years ago, there was a really funny site called “Look at this fucking hipster” (I think it became a book too), and it posted pictures of people who you could say like “ok wow yeah that guy is trying too hard and he’s goofy”, and it was a very specific archetype. But now, just the general idea of a hipster is this weird elastic thing that’s floating around the internet and people just apply haphazardly to anyone who is younger and/or cooler than them. I visit the Negative Feedback Facebook group a lot (based on the great Youtube channel of the same name), and people there are, in general, a very young, cool, fashionable group, and a very common thing there is that people in that group will complain that certain cameras have gone up in price because of “fucking hipsters”, but it’s so meaningless, because everybody complaining are basically identical to the supposed “fucking hipsters” buying all the cameras. The only real difference is that one group is buying the cameras and one is mad.

There’s also a very common thing for older photographers, who were shooting film before digital ever came along, to complain about “hipsters”, and it’s so weird, because I’m sure half of them don’t even know what they’re complaining about. Like if you showed them a picture of any young person with a film camera, no matter how unhip they were, they’d go “Yeah those are the hipsters who just care about looks”. I set up a table at a camera show in Toronto recently, selling film, and I talked to a lot of people, and saw all the people who came by, and maybe 1% of them were people I think you could realistically call hipsters, and the rest were just normal people, young and old, dressed very regularly. But even the ones who were super hip, with super modern haircuts, etc, were legitimately INTO film. The ones I spoke to were very knowledgeable and were interested in film on much more than a surface level.

I actually told a story on Twitter about this show: Near the end, I saw a police officer, fully dressed up in uniform with the padded shirt thing and everything, and he was walking slowly around the room my table was in. I thought he was probably doing community outreach, or maybe he was on the lookout for stolen goods or something. When he got to my table, I expected him to move on quickly, because I wasn’t selling used items, but it turned out, he had just got off work, and wasn’t there in a professional capacity, he was just a guy getting back into film photography, and he bought a couple of rolls of HP5 from me. There is such a wide range of people into film photography!

What is your personal film workflow? Do you do darkroom printing, or do you scan your negs?
My workflow is this: I develop 99% of my film myself, and I scan it. When I print, I use a good inkjet printer I have, but I haven’t venture into darkroom printing yet. I’d love to get into it, but I don’t have the space where I’m living. I’m hoping to check out a community darkroom sometime this year when I finally have time though.

For the Buy Film Canada website, I did all the product photos on film, and at one point I decided to outsource some of the developing and scanning for that to a lab. That’s a much easier workflow haha, although obviously it costs more. I overall do like doing it all myself though, because I find it relaxing, and also it’s a lot easier as far as not having to drive anywhere and wait too long.

Do you have any future plans for the business?
I’m starting to carry zines, and photo prints. I’ve got some of that stuff coming my way now, and it’ll be up in the next week or so I reckon. I want to keep expending it to offer products that are tied in with film – adding more chemicals for instance. I’ve also just received a load of Field Notes notepads that I’m going to have up, since having a notebook handy while shooting any photos is so, so handy.

Would you ever consider selling developing kits or offering a service yourself?
I do sell colour chemicals now, which have traditionally been very, very tough to get in Canada. I’m looking to stock B&W chemicals, because a lot of people have asked lately, and I’ll probably have those in stock soon. I’m actually considering doing a whole kit with the chemicals, developing tank, changing bag, etc.