When Anthony Palma first started his video game development company Jump in 2012, he found himself facing a unique set of problems that nobody had ever prepared him for.

“We never released the game we worked on because we realized there were two major problems for developers: discoverability and distribution,” says Palma. “We knew a subscription model (which had not existed successfully in gaming) was a potential answer, but we saw all the technological and pricing problems with other offerings, so we decided to investigate a potential solution ourselves.”

One of the things that crossed his mind was the possibility of creating a subscription-based platform to connect new indie games with gamers looking for something to play. With the movie and music industry both finding success with their subscription based platforms, Palma believed that it was only a matter of time before the idea would make its way into the video game industry.

“When Unity made an announcement that they’d support WebGL builds in late 2014, we saw a tremendous opportunity to finally build the experience people wanted in a subscription service since video streaming just doesn’t work fully as intended. Hence, the idea for Jump was born in 2015.”

Jump is something new: it’s subscription based platforms providing gamers with new and exciting indie games monthly. For only $9.99 a month, gamers will have access to over 60 of the best indie games on the market. Users can also expect around 10 new games added each month.

“It’s a highly curated library; it’s going to be between 60-100 games at launch, and then we’ll be adding a certain number every month after that,” Palma said in an interview with Gamasutra. “Really, what we wanted to be able to do is provide that highly curated, polished, responsive experience that hasn’t really come up in gaming yet, particularly in the subscription world.”

In order to create the best experience for its users, Jump is very selective on which games it chooses to include in its collection.

“Games have to meet a minimum of one of our three quality standards: award-winning, highly-rated, or hit-seller. Most games meet two, and some meet all three. Some of our games you’ll know by name, but some you will have never heard of, even though they were IGF or IndieCade award winners. We want to give all of them the same visibility on Jump.”

While getting into Jump’s library may be a tall task, developers are well rewarded for their efforts. Palma says that 70 per cent of the company’s revenue is dedicated to paying back the game developers, with each creator receiving more money based on how much their game is played. 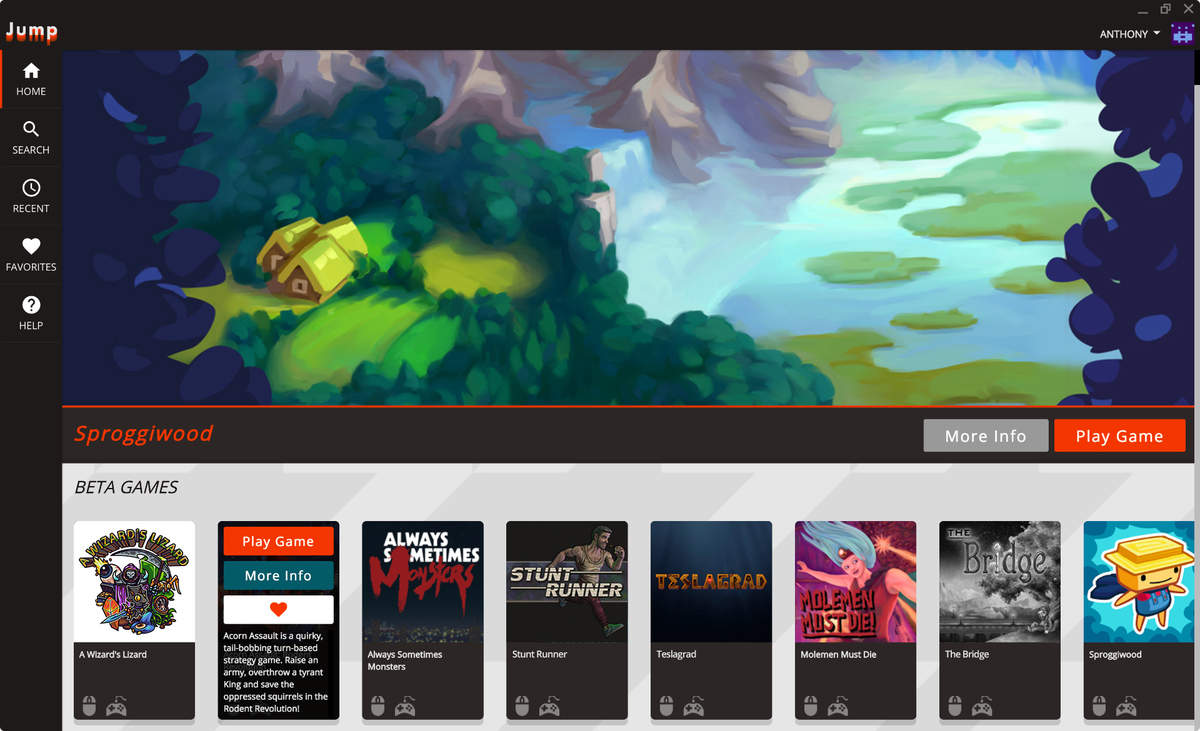 Jump’s collection features 60+ indie games that you can play from your browser or on the official desktop app.

The Business of Jump

From a business perspective, Palma says he had to go beyond his own areas of expertise in order to make Jump happen. In addition to an experienced group of engineers and designers, Palma went out and found advisors from companies like Square Enix, Sega, and EA to help his company succeed.

“I’m a first-time founder and I like to say that ‘I know what I don’t know’ instead of saying ‘I don’t know what I don’t know.’ To that end, I knew I didn’t know how to run a major product, or deal with publishers, or raise funds for a company like this, so I worked hard to expand my network and add the stellar list of advisors we have today who can help me improve as a leader of this company. I also like to hire people that are smarter than me in their respective roles and give them a good bit of autonomy so everyone feels responsible for their part and is even more engaged in our success. Our advisors help our team members too in various aspects of development and planning. They’re not just big names — we talk to them very frequently and they’re quite engaged in helping us succeed.“

After assembling an all-star cast to help make his dream come true, Palma says he had to remain patient when developing Jump, from bringing the idea into fruition to waiting for the tech world to catch up.

“We saw where the tech was going in late 2014, but it didn’t actually come to fruition fully until 2017, so we had to bide our time building an early alpha version that would allow us to raise the funding required to launch a major service like Jump. During that time, when we weren’t funded, our skeleton crew all had different jobs (I ran a game dev accelerator called Core Labs), so we had to work nights and weekends on the alpha build. And, since this is my first startup, I don’t have the name recognition to allow VCs to bet on me early, so fundraising was incredibly difficult. Once we got our Alpha together and convinced enough brave investors to support us, we were finally able to execute against our plan, and the timing lined up perfectly with the tech advancements we had been waiting for.”

Check out what Jump has to offer during its closed beta, which is currently open from now until July 24. Be sure to also follow Jump on Twitter for more information leading up to the platform’s official release date.